Main » Archive materials in the field of international cooperation » Hamburg 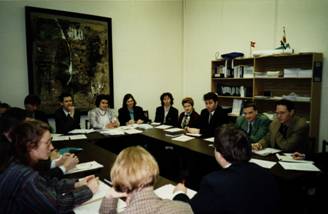 During three years four Russian and four West European experts had been working together. The principal direction of their work was the specification of priority ecological projects for Saint-Petersburg, search for international financing for them and coordination of their realisation. The major part of the projects mentioned below was initiated thanks to ЕСАТ. ЕСАТ also performed the function of an information centre of some kind helping to effect contacts between the Russian and foreign nature conservation organisations. When the EU project had been finished in 1996, the Russian group of experts became a part of the Department for Environmental Protection of the Saint-Petersburg City Administration as the Department of International Projects and Programs. 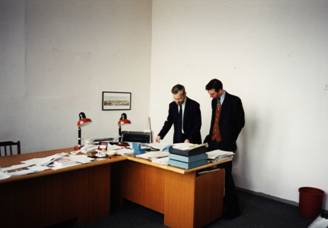 Hamburg took direct part in the given project realisation because all West European experts, who had been working on the project in Saint-Petersburg together with the Russian colleagues during three years, were at that time the employees of the Hamburg Ministry of Environment.

In the same time Hamburg was rendering comprehensive aid to the Russian experts in searching for partners for various environment protection projects and the most effective ways of environmental problems solution.

The project of the “LIFE” program “ECAT-Saint-Petersburg” was finished in March, 1996, but the created Centre continues working in accordance with the tripartite agreement signed by Saint-Petersburg, Hamburg and the European Union Commission.

The chief of the Hamburg Ministry of Environment the senator Mr. Fritz Farenhold took part in the ceremony. 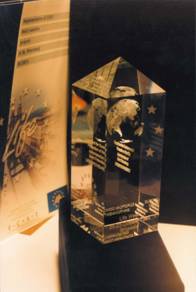 With the termination of the project of the “LIFE” program “ECAT-Saint-Petersburg” the cooperation between twin-cities did not cease. Hamburg participates in realisation of all subsequent projects of the program “LIFE”, realised by the Committee for Use of Natural Resources, Environment Protection, and Environmental Safety of Saint-Petersburg.

The information system – analogue of the system operating in the northern coast of Germany (VPS) was created for Saint-Petersburg. The Russian experts were trained to use modern methods of oil spills controlling. 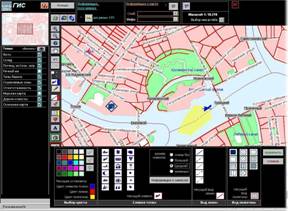 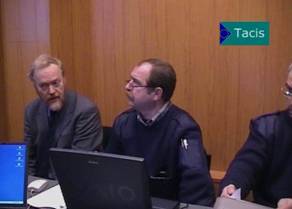 The Deputy Senator of Hamburg Mr. Hans-Walter Herrnring is presenting to Saint-Petersburg a minibus for carrying out the environmental awareness campaigns 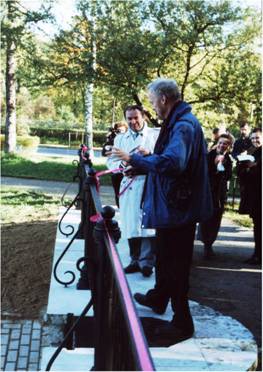 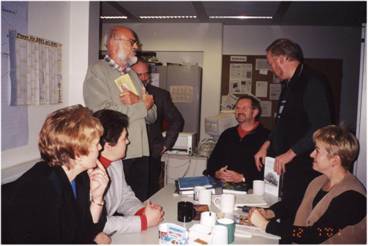 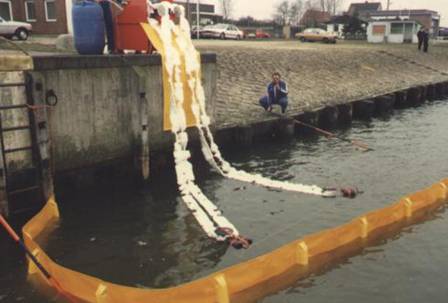 Booms and skimmers of the absorption type, transferred within the framework of the base station strengthening project in Kronshtadt 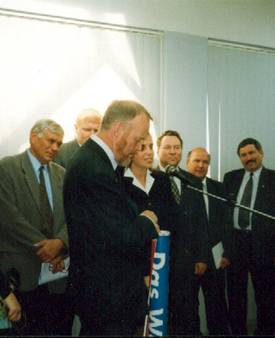 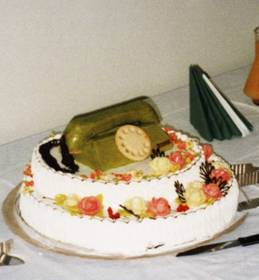 The colleagues from Hamburg are welcoming the opening of the Public Environmental Information Center and the beginning of “Green Phone” work.

PROJECTS OF THE PROGRAM “LIFE”

Within the project realization, the oil-gathering equipment from Hamburg, Aalborg and Havre was donated to Saint-Petersburg. Technical training of workers of the services for struggle against oil spills was conducted in order to teach how to treat the abovementioned equipment. The project eventuated in a seminar on the management and legislation in this sphere. The project development provides the fullest use of the received equipment.

Together with the experts from Hamburg, the specialists of the Aarhus City Administration (Denmark) took part in the project. 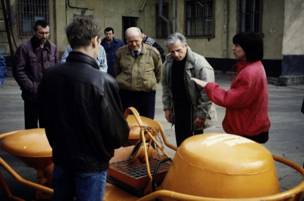 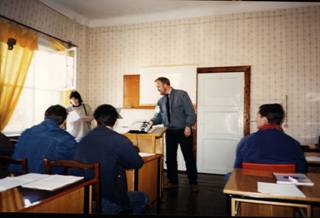 With the assistance of the twin-cities Saint-Petersburg, Hamburg, Turku and Aarhus and with the help of the Paris State Hospital Association, the Scheme of handling with the wastes from Saint-Petersburg health care facilities was developed, including the organisation of pilot testing of the scheme. In the course of the project, the data was collected, the scheme of waste handling was developed, the training of medical personnel was carried out. The medical waste processing equipment of the German company “Preussag” was purchased for the performance of pilot realisation of the scheme. The specialists from Hamburg participated in working out the scheme of handling with the wastes from the health care facilities in Saint-Petersburg, choice of the installation of recycling of such wastes.

The project was aimed at the abatement of disposal of heavy metals by electroplating enterprises of Saint-Petersburg by means of the implementation of staff training programs and application of new technologies of waste-water treatment and for this purpose the demonstration projects of prevention of heavy metals disposal from drains on several electroplating enterprises of Saint-Petersburg were developed and realised as well as the experimental mobile installation was created for collection and decontamination of the concentrated electrolytes.

Generalization of ecological and economic results of projects implementation and development of the program for Saint-Petersburg of the stage-by-stage abatement of surface-water contamination by heavy metals allowed working out the schedule of high priority actions for accomplishment of the program of the abatement of heavy metals disposal by electroplating enterprises of Saint-Petersburg.

Coastal Conservation and Local Agenda-21 - a pilot project for Russia 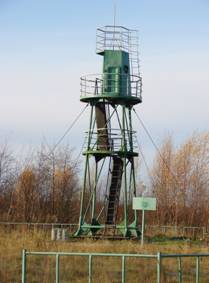 The joint project with the Government of Leningrad region is aimed at the development of the environmental education programs on the basis of the Yuntolovsky Wildlife Reserve and development of the “Agenda 21” for Primorsky district of Saint-Petersburg as a pilot sample. Within the project realization in Primorsky district, the “Local Agenda 21” was prepared and approved by the inhabitants of the district, the Coordination Council on “Agenda 21” implementation was created, and informational materials of the Yuntolovsky Wildlife Reserve were prepared and distributed. 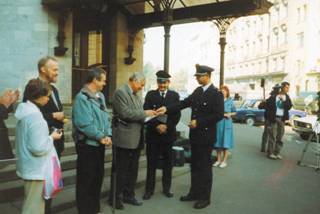 The German firemen presented the wildlife reserve with two new vehicles for fire-fighting on the territory of the Yuntolovsky Wildlife Reserve and helped to install a tower for observation of birds. 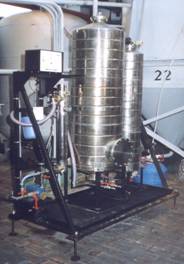 The main objective of the project was the creation of conditions for water pollution prevention in the Baltic Sea from the accumulated solid wastes of Saint-Petersburg. To effectuate this purpose, technologies of drainage water treatment had been chosen on competition basis. Two German, two Finnish, and four Russian companies presented their propositions on tender. An international group of experts chose the proposition of the German company “Rohem” that covered the requirements of the tender best of all. Test run of the installation of the company “Rohem” was performed at the Solid Waste Landfill-3 in July, 2000.

Experts from Hamburg shared their experience in the environmental pollution prevention of landfill wastewaters and participated in the Feasibility Study development and creation of a demonstration project of the discharges collection and treatment.

West European partners: the Ministries of Environment of Finland and Hamburg.

Within the framework of the given project in Saint-Petersburg, the regional scheme of environmental auditing was created, including the projects of local legislative documents, their acceptance, development of special programs of environmental auditors training. 57 auditors were trained in the Saint-Petersburg affiliated institution of the Research and Development Center “Ekobezopasnost” (Moscow), registered within the project, in January – February, 2002. 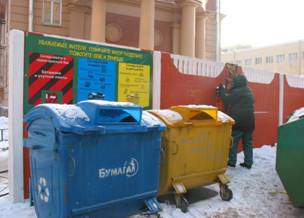 Within the project realization that had started in October, 2002, the collection and processing of the baseline data on municipal waste streams was accomplished, the “Plan of Nature Conservation Actions at the SDW Handling in Saint-Petersburg” was developed, the pilot project of the SDW collection on the basis of the Zvezdny Municipal Formation in Moscovsky district of Saint-Petersburg was implemented. The long standing partners of the Committee took part in the project: Ministry of Environment and Health of Hamburg, Swedish Environmental Protection Agency, Ministry of Environment of Finland, Waste Handling Department of Turku. The specialists from Hamburg participated in creation of the plan of nature conservation actions for municipal solid wastes of Saint-Petersburg. 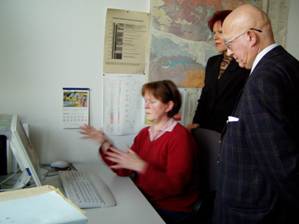 The result of the project was the system of interactive representation of ecological information for various user groups, created in Russia for the first time.

Hamburg made an invaluable contribution to the creation of the system of management decision-making information support in Saint-Petersburg, introduced the Russian colleagues to the organisation of collection, storage and processing of the information concerning the environment, as well as the forms and methods of providing of such information to users.

© 2005 — 2020 Committee for Nature Use Environmental Protection and Ecological Safety